Michigan Bed and Breakfast Association was singled out in tourism awards handed out Monday in Kalamazoo by Michigan Gov. Rick Snyder. 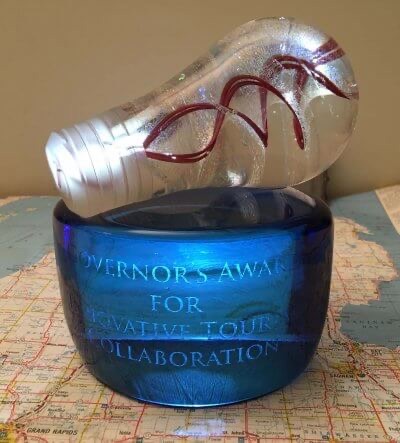 Recognized for collaborating with nine Michigan inns and two other organizations, MBBA was awarded the 2011 Governor’s Award for Innovative Tourism Collaboration in the category of tourism marketing and promotion. The other two organizations with which MBBA collaborated were InsideOut Solutions, a Washington State web developer, and Travel Michigan.

Four awards were given in four categories at the annual Governor’s Conference on Tourism, which opened Sunday, March 20, at Kalamazoo’s Radisson Plaza. MBBA’s president, Mike Venturini, accepted the award on behalf of the association. Along with his wife, Lori, Mike is the innkeeper/owner of Munro House B&B in Jonesville.

The bed and breakfast collaboration won for:

“All this, starting with development of the new website last year, was the project of volunteers,” said Linda Singer, executive director. “I am proud of our members for pulling together so significantly, they earned the association statewide recognition. We are deeply honored.”

MBBA, a leader among statewide B&B associations, is celebrating its 24th year of continuous operation as the only not-for-profit marketing arm and educational resource for the bed and breakfast industry in Michigan.