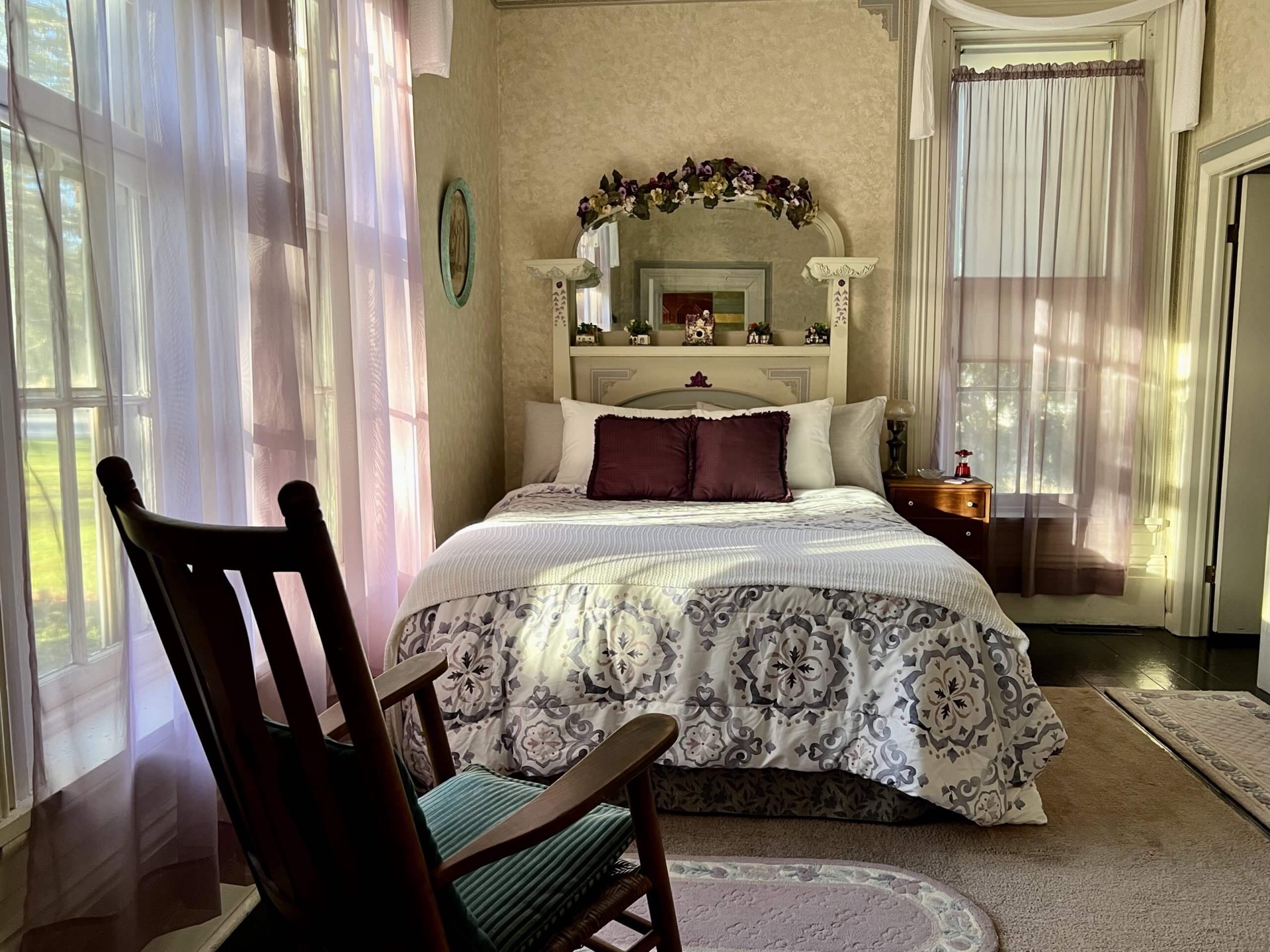 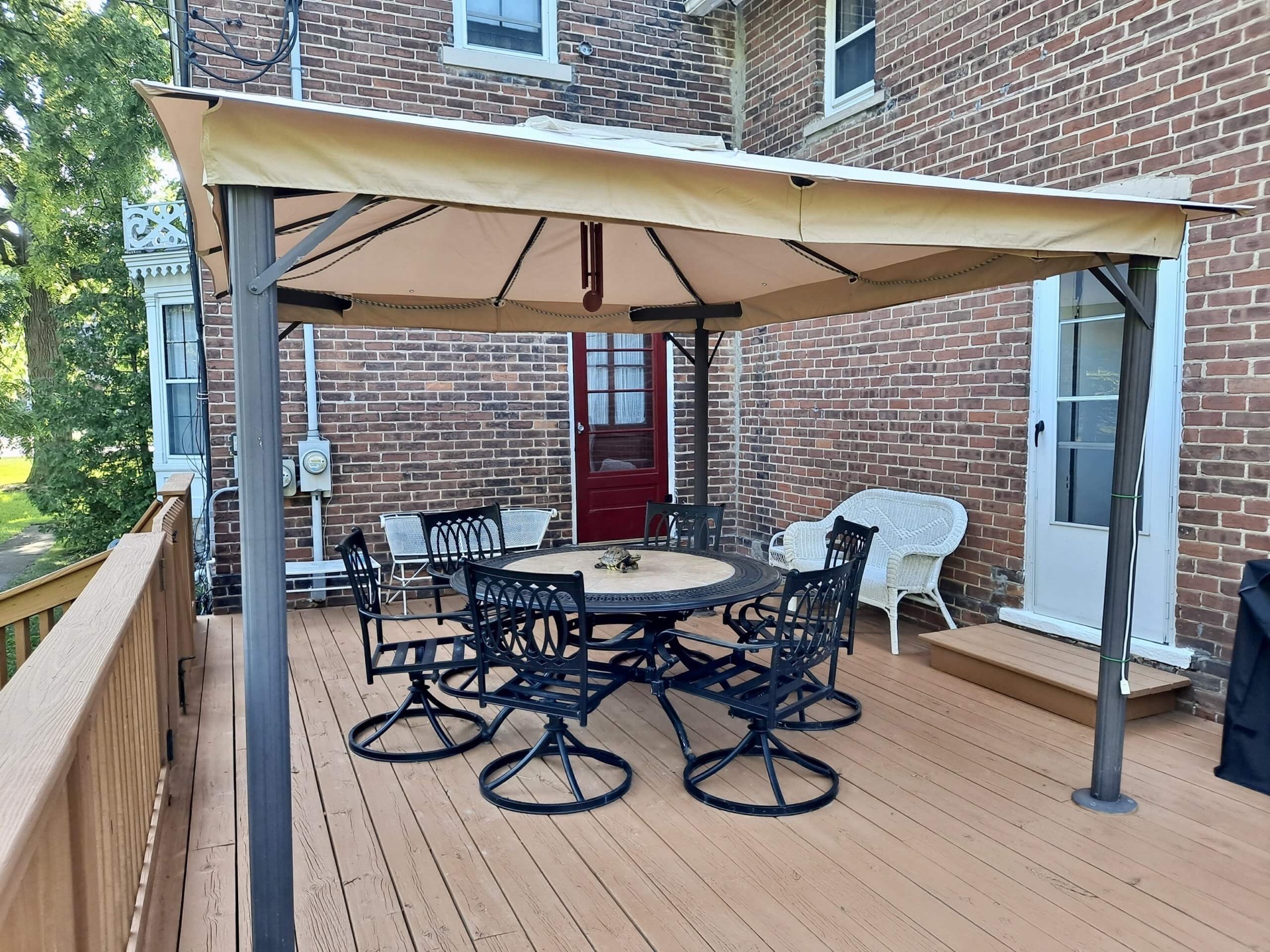 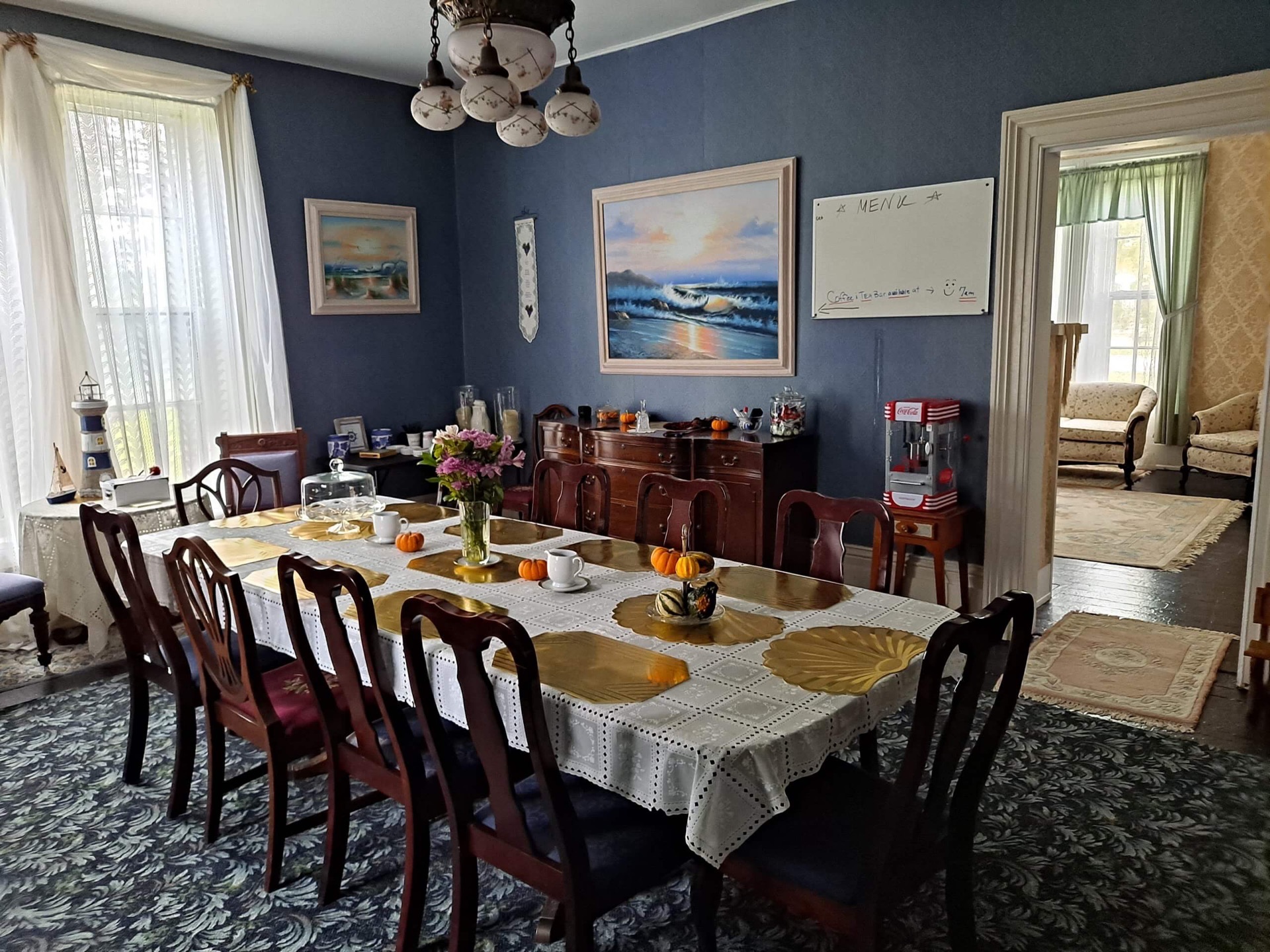 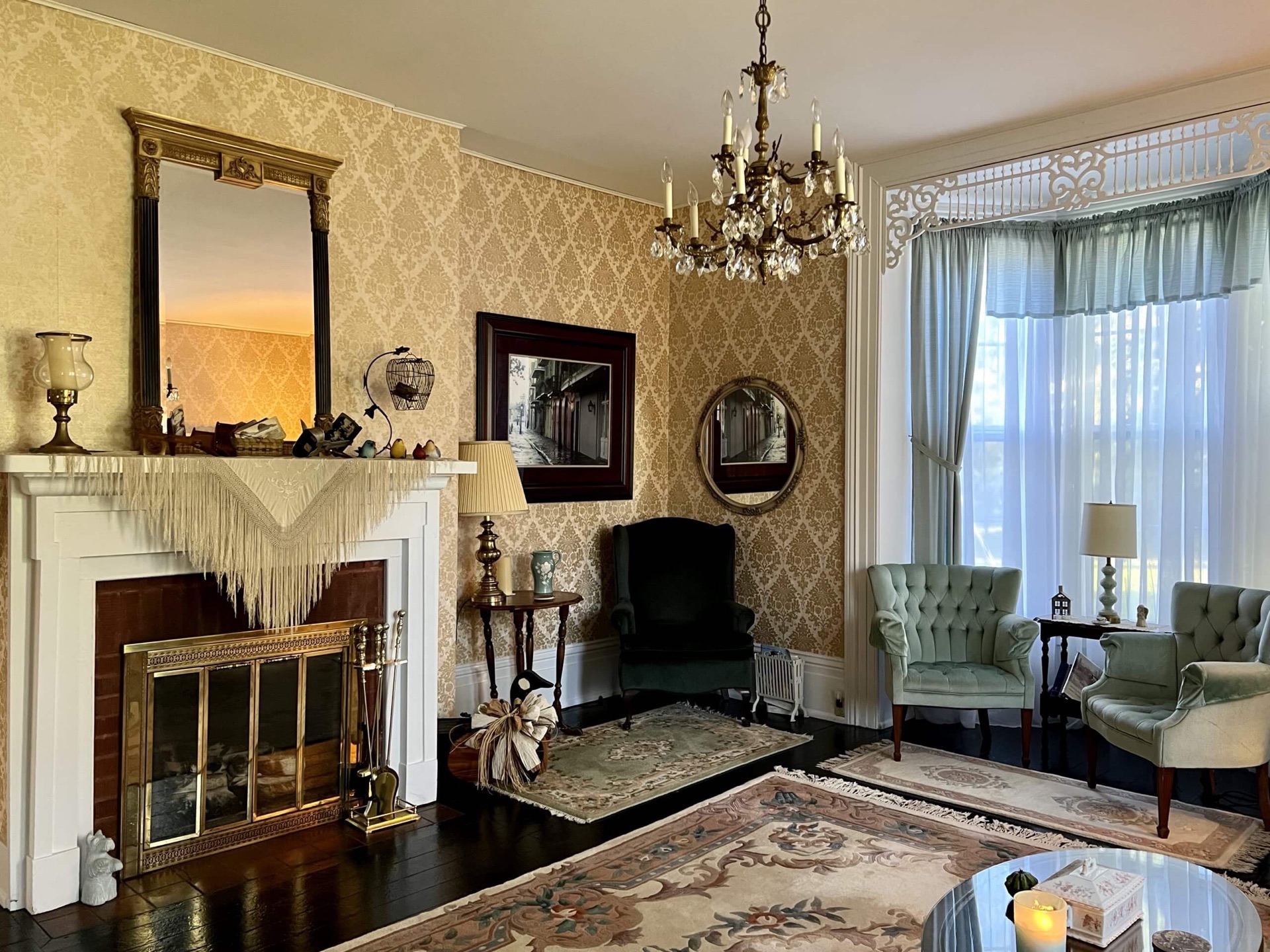 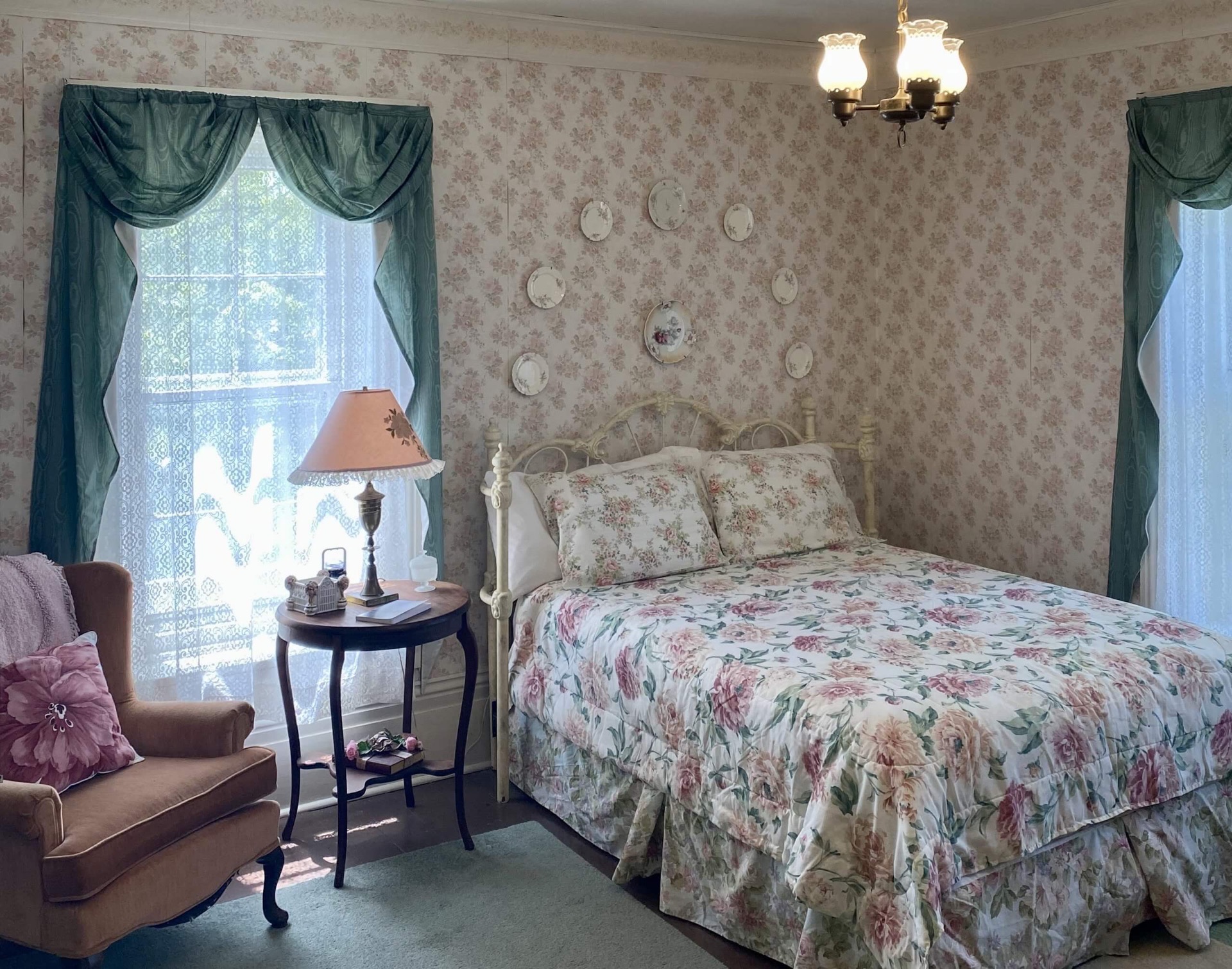 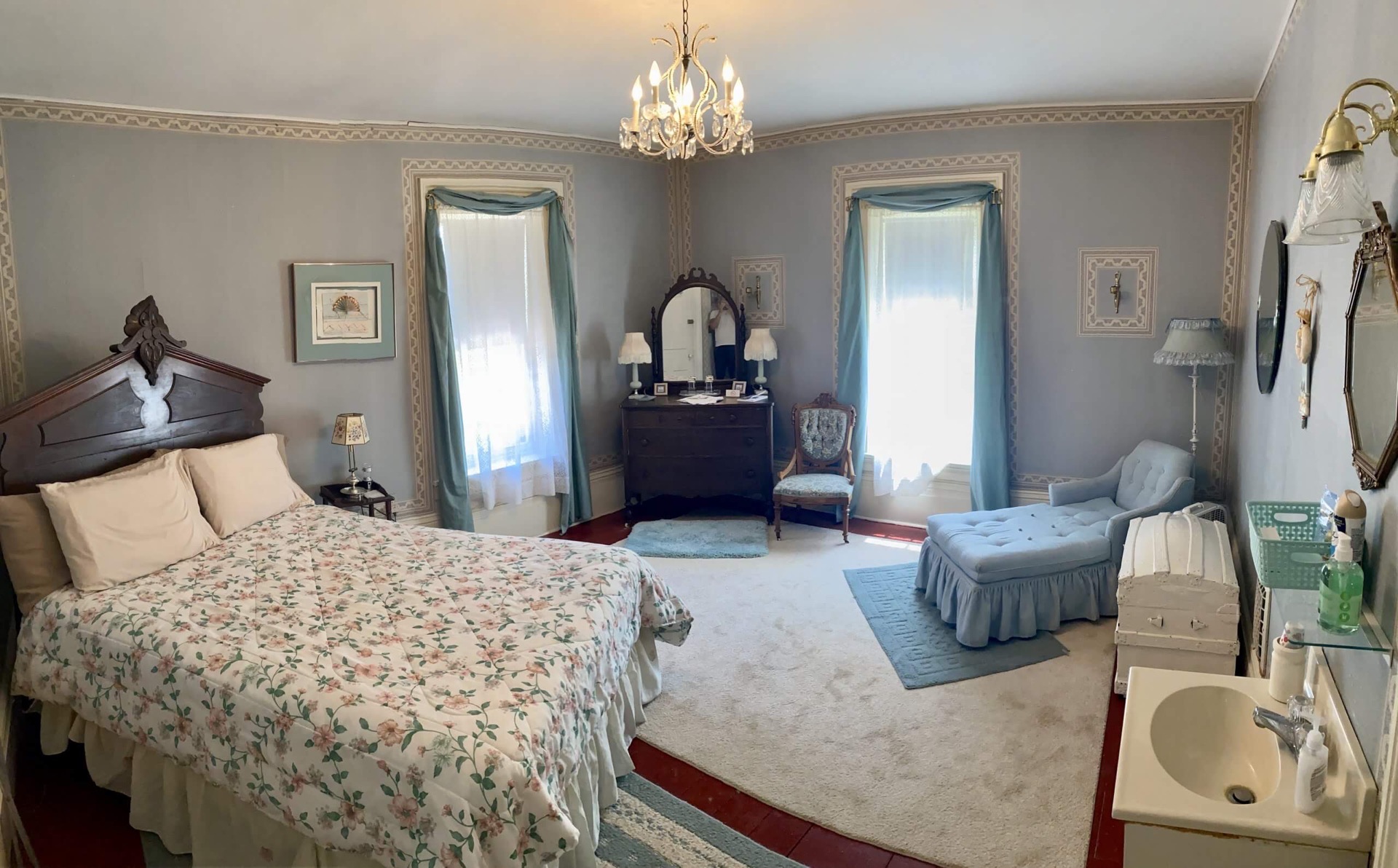 With seven rooms, including a family suite, Raymond House is less than two hours northeast of Detroit’s city center and 43 minutes north of Port Huron.

As harbor towns go, ours is a quieter and more laid-back cousin to Lexington, 11 miles to our south. This is one reason so many people love Port Sanilac.

This home first became a bed and breakfast in 1982. The inn had been closed for nine years, when I acquired and reopened it in 2021.

I love innkeeping. I must tell you it’s uplifting to read reviews such as: “Mary was phenomenal. We felt so right at home. She made our weekend getaway unforgettable. The rooms were beautiful, the breakfast was amazing and delicious!"

Which room suits you best?

If you prefer a first-floor room, choose the Princess Room, with a queen bed and an en-suite bath with shower. The room has a small fridge.

We have four rooms on the second floor:

The Family Suite occupies the entire third floor, with a king-size bed and sofa in one room. On the other side of a hallway — which includes a fainting couch and reading nook plus access to the shared private bath with shower — is the Kid’s Room. It has a queen-size bed plus bunk beds plus a crib and rocking chair.

I love to see guests relaxing in the welcoming first-floor parlor with its fireplace, picture windows, and comfortable furniture. Period touches include an antique View-Master, glass goggles, and photos on the wall of Uri Raymond and Nancy Ann, the home’s first occupants.

Adjacent space we call the Meeting Room is used for games and crafts and could accommodate up to 12 adults for a retreat or other meeting.

Breakfast is served in the dining room between 9 and 11 a.m. One day, breakfast might be blueberry pancakes, another day steak and eggs, with cornbread muffins and country-fried potatoes. In warmer months, some guests dine on the deck.

If you’re among the many travelers who come to Michigan to see and soak up the fascinating history of the state’s many lighthouses, Port Sanilac and the Raymond House offer a great vantage point. Walk one block to see and photograph the Port Sanilac Lighthouse, constructed in 1886 and now owned by a lighthouse preservationist, who opens it to tours periodically.

A trip to Port Huron, about 40 minutes south, will allow you, in season, to climb the 82-foot-high restored Fort Gratiot Lighthouse, established as the first lighthouse in Michigan and the second on the Great Lakes. While you’re there, tour the nearby Huron Lightship, which served as a floating lighthouse for five decades.

Expect fees to climb or tour lighthouses and pay them cheerfully. You’re helping to preserve these historic beacons.

Note to captains: Port Sanilac Municipal Harbor is an ideal stopover if two or three couples or an extended family is traveling under sail or power. Reserve rooms at Raymond House for whoever will be staying ashore. It’s an easy walk to the inn. Or, I can be there in less than two minutes to pick up you and your bags.

For things to do on the water in Port Sanilac, see Adventure.

Kayak the Tip of the Thumb Heritage Water Trail between Port Sanilac and Port Austin. The trail consists of rest areas and campsites marked with signage visible from Lake Huron. Larger boats stay in deeper waters along this stretch of shoreline because of rocks and shallow areas, so kayaking near shore can be peaceful. However, wind and wave conditions on Lake Huron are changeable, so it’s recommended that you launch in a sea kayak which you have experience using.

Port Sanilac Marina, which overlooks the harbor, is a dealer for some slick-looking Hobie Kayaks (plus sailboats and paddle boards).

If you want to kayak in and near the harbor on a fair day, Port Austin Kayaks has a rental outpost at the harbor.

Take a day trip or a sunset cruise aboard Miss Port Sanilac, a 45-foot trawler. Charter a fishing trip to troll for trout and salmon or to cast a line for perch. Learn to sail. The folks at Port Sanilac Marina are the ones to ask about current opportunities like these.

You can scuba dive shipwrecks out of Port Sanilac. The 163-square-mile Sanilac Shores Underwater Preserve was established to protect a number of historical shipwrecks, including the Regina, a 250-foot freighter that went down in a storm in 1913. In the many decades before technology made Great Lakes navigation safer, this area experienced many disastrous wrecks, which fascinate divers today.

Other adventures in our area include:

For a relatively unpopulated area, we are blessed with some good restaurant options, including:

Raymond House Inn B&B occupies a home dating to 1872, named for the man who built it. Uri Raymond opened a hardware store in 1850. when the town was known as Bark Shanty. Why the odd name? Lumbermen who settled in Michigan’s then-heavily wooded Thumb would peel bark off hemlock trees and sell it because it contained a substance used in tanning leather. Someone shingled and sided a dwelling with bark, and it became an aid to Lake Huron mariners, leading to the name Bark Shanty Point. The hardware store still bears the Raymond name, but the last family member who operated the store sold it in 1969.

Walk the grounds of the Sanilac County Historic Village and Museum, and you’ll see how devoted people in our area have been and are to preserving artifacts of the past that might otherwise be lost to development or dispersed. More than a dozen historic buildings, including the Loop-Harrison Mansion, a schoolhouse, and a general store, have been preserved. Scheduled tours are available in the summer. From drive-by paczi day with polka music on Fat Tuesday to October’s macabre decorating and the spooky trail, it’s clear that the people who oversee and operate the museum know how to make history and culture fun.

The Barn Theatre, offering productions during the summer, is located in the Loop family’s original barn on the museum grounds.

Want music? Early on summer Saturday evenings, take your chairs to Harbor Park in Port Sanilac for Music in the park. Our Blues Festival is a popular event during the first weekend of August.

Lexington has music in their harbor park on Friday evenings in summer. And the beautiful, 300-seat Lexington Village Theatre offers an almost-year-round schedule of live music and comedy acts.

Although Raymond House is not available as a wedding venue, as of now, know that the B&B could accommodate up to 17 people attending nuptials at one of the churches in the area or at the Sanilac County Historic Village and Museum. You’ll love our breakfasts and welcoming hospitality. Call me at 810-622-8800 to set up a booking of all our rooms for a minimum of two nights on weekends.

The third floor of Raymond House Inn provides a Family Suite with two rooms across the hall from each other and sharing a bathroom. You’ll get a king bed, a queen bed, bunk beds, and a crib. Two other rooms, on the second floor, can accommodate a third person.

In mid-September just before the official start of fall, the Lexington Arts Council hosts its annual Bach Festival in multiple small venues. It attracts outstanding musicians and is always a sell-out.

Our area’s many autumn and Halloween-related activities include fun, spooky events at the Sanilac County Museum and hayrides and pumpkin carving at Forester Park.

Ice fishing is available in Lexington and Port Sanilac Harbors, typically by mid-January and into February.

Birders, March is the month you can reliably see large flocks of tundra swans flying north over Lake Huron toward their summer breeding grounds in the arctic of North America. 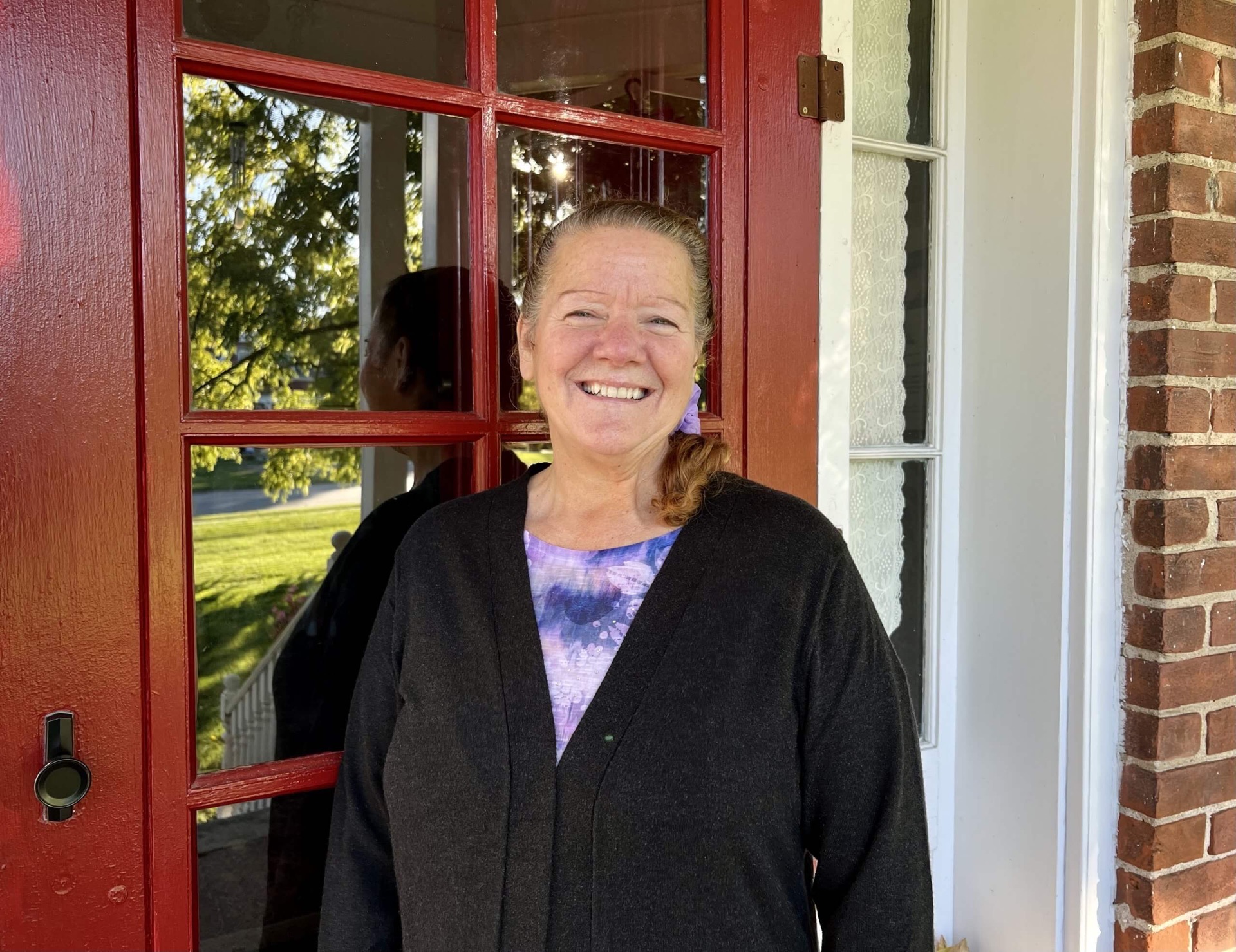