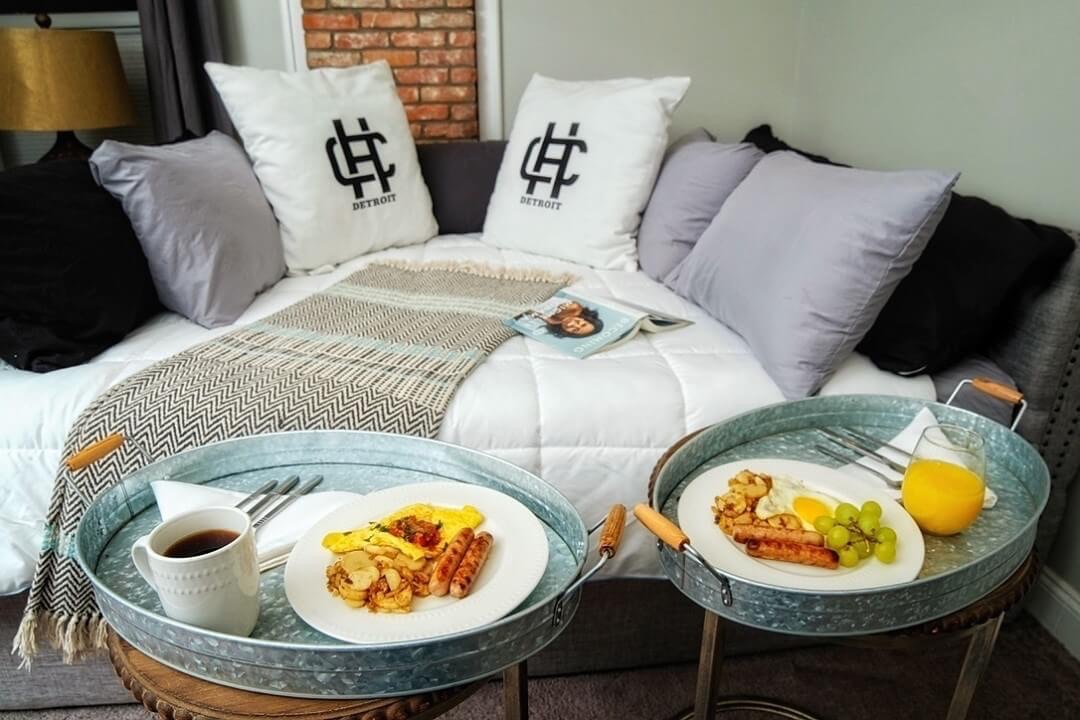 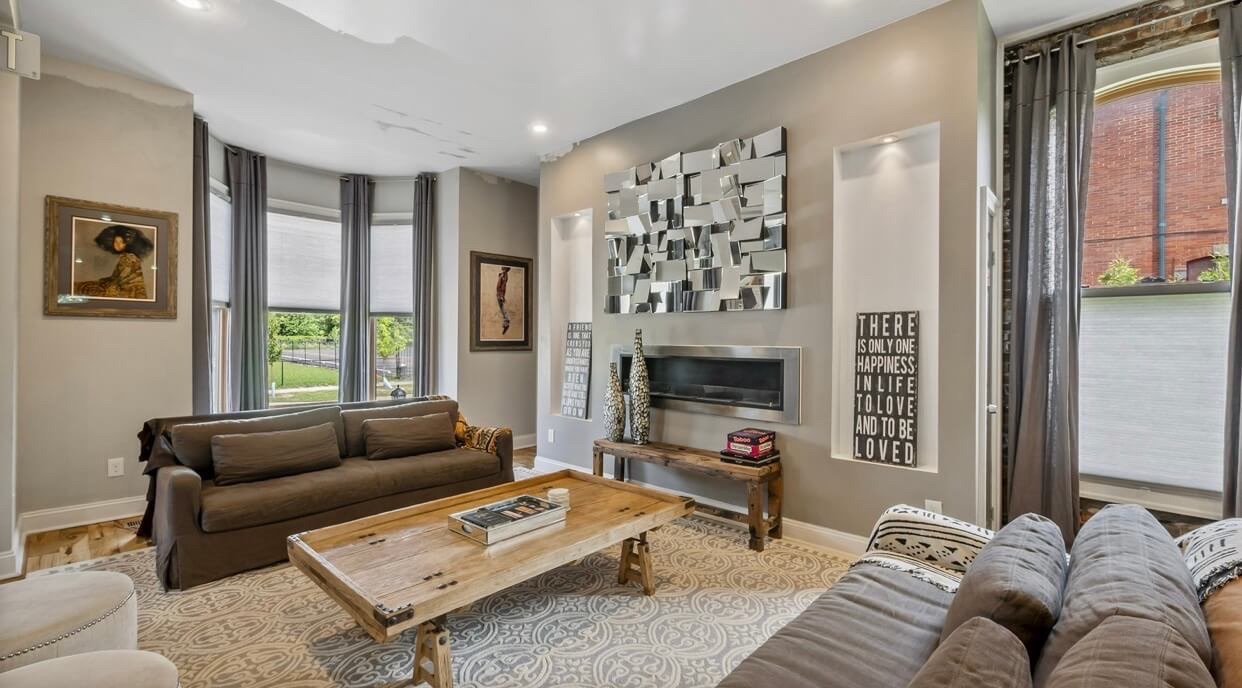 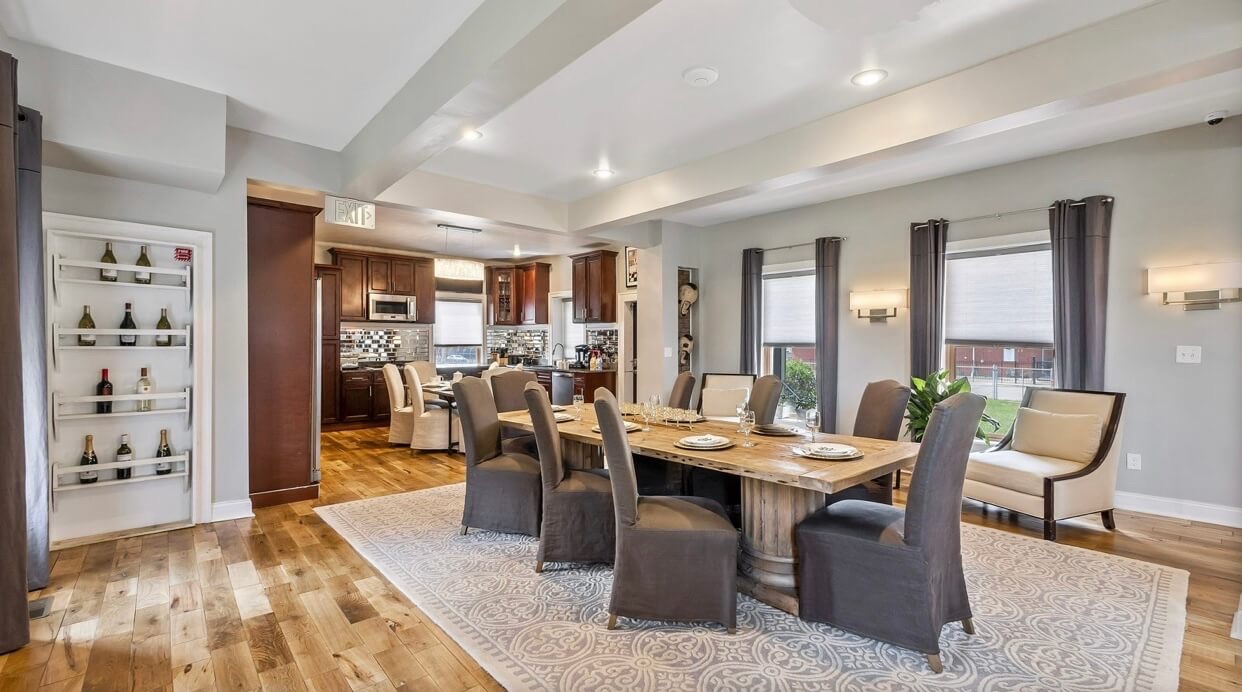 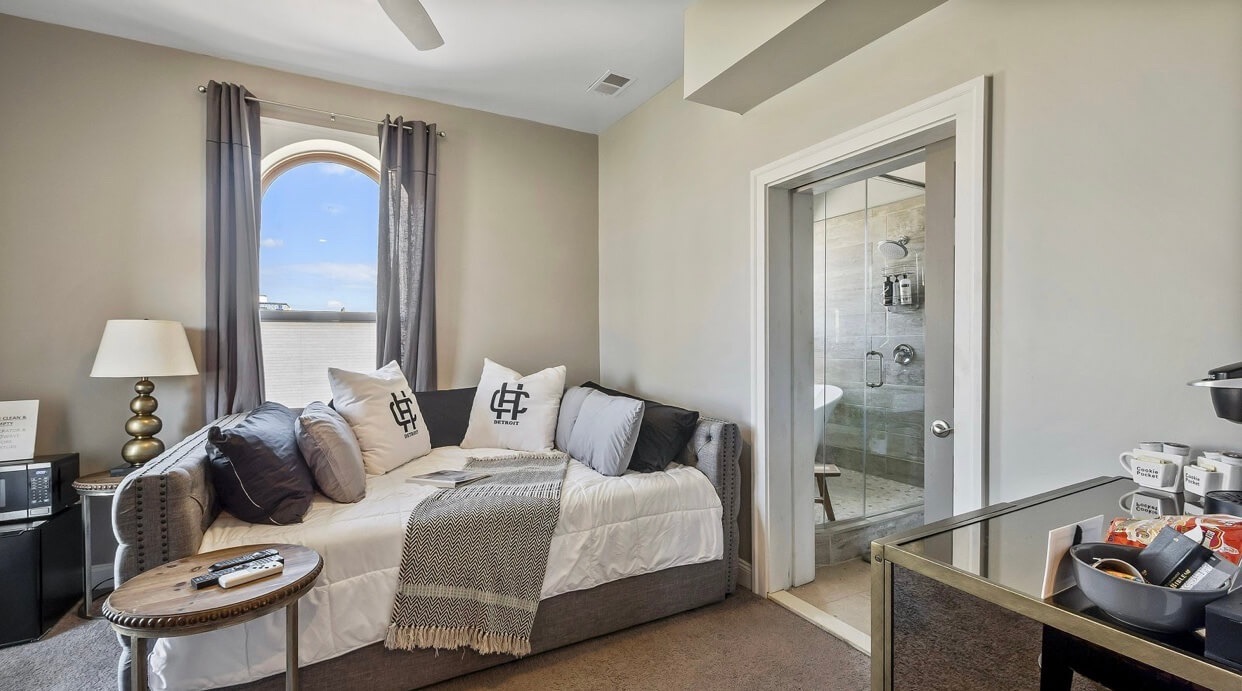 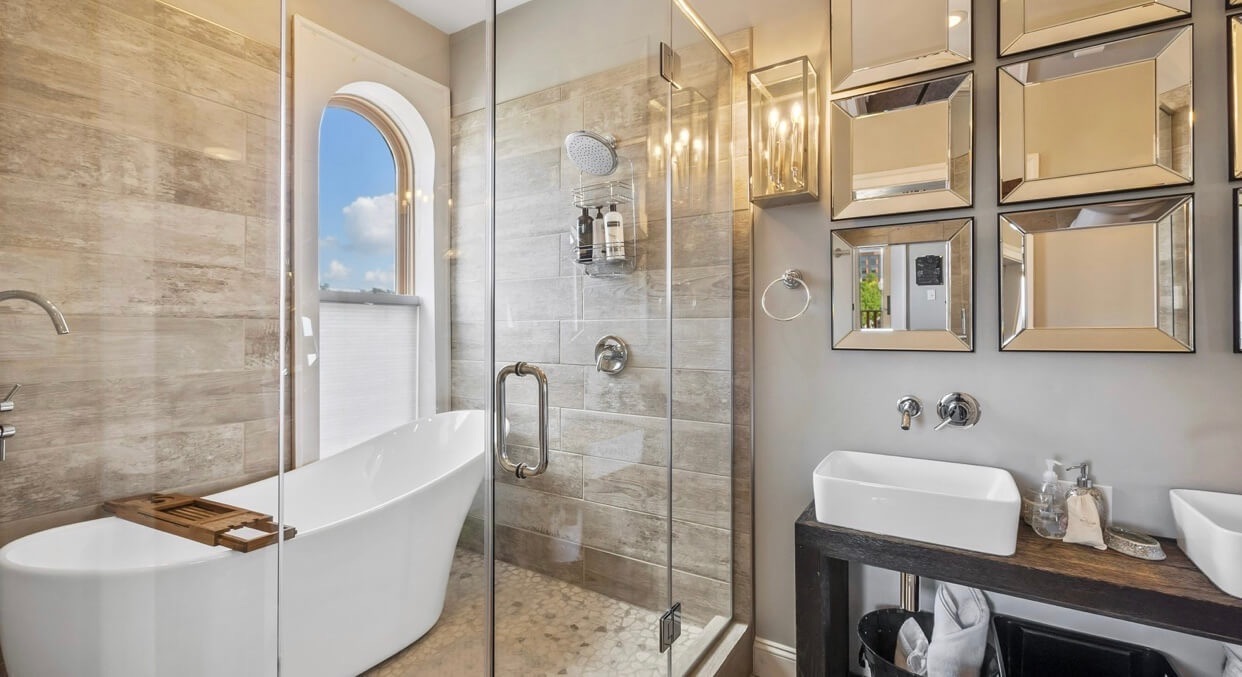 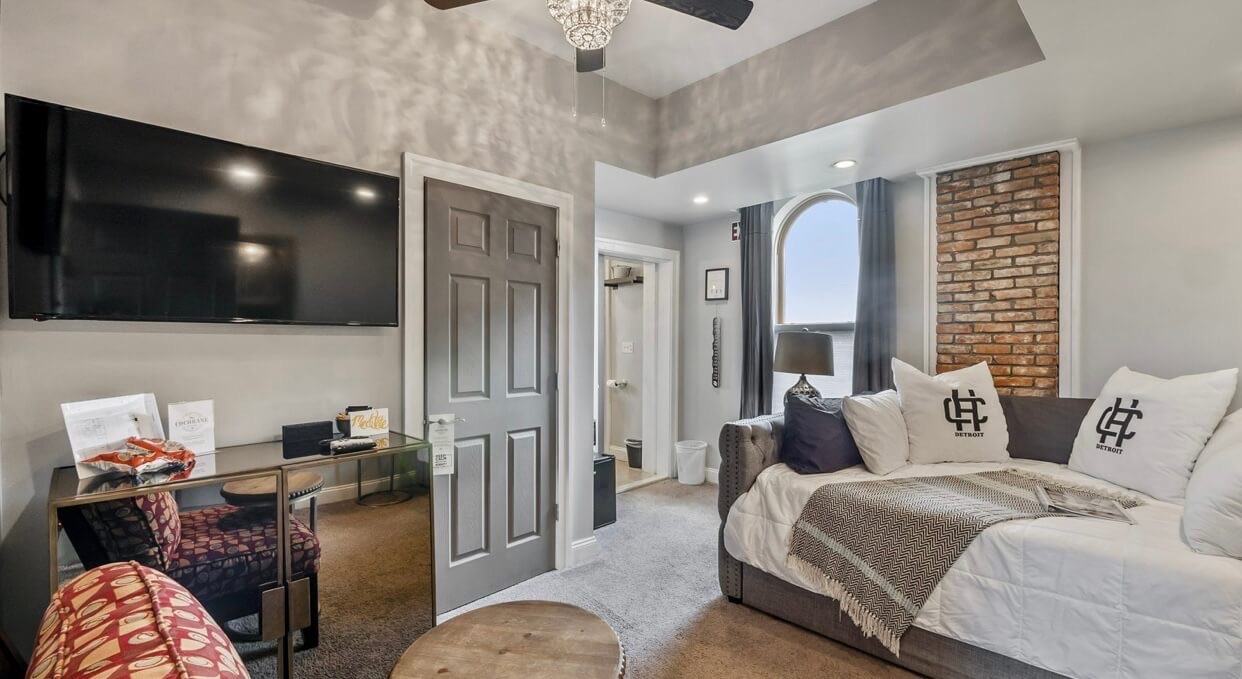 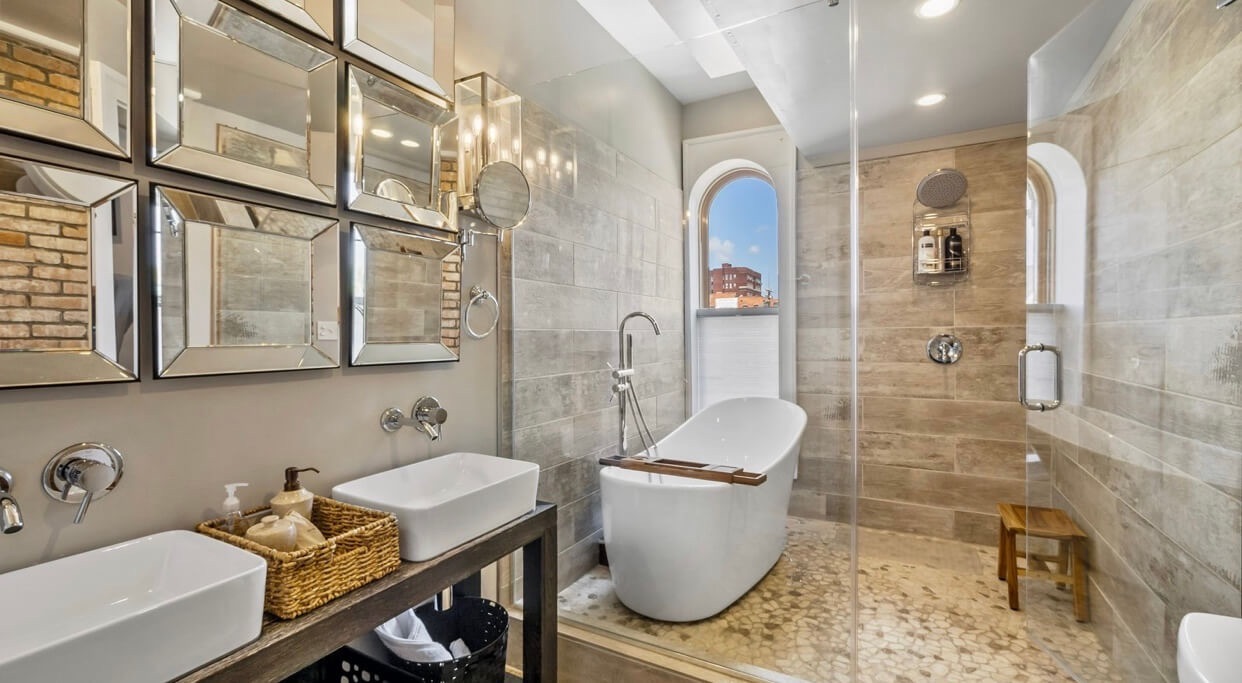 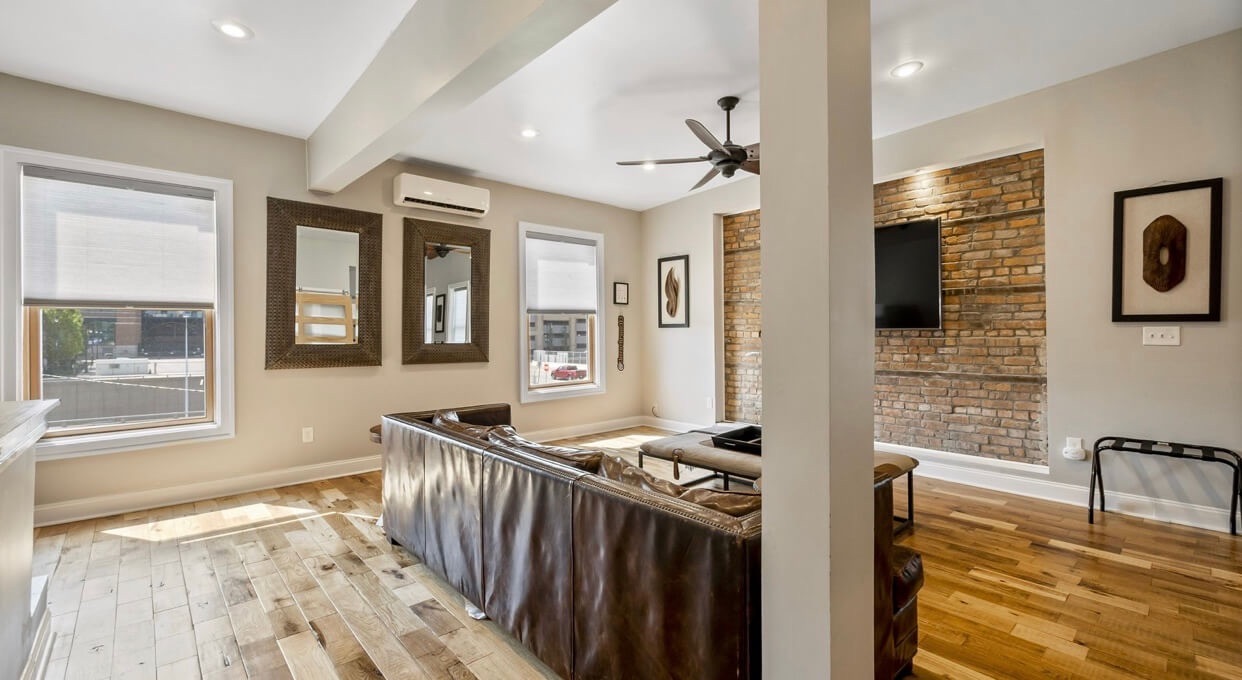 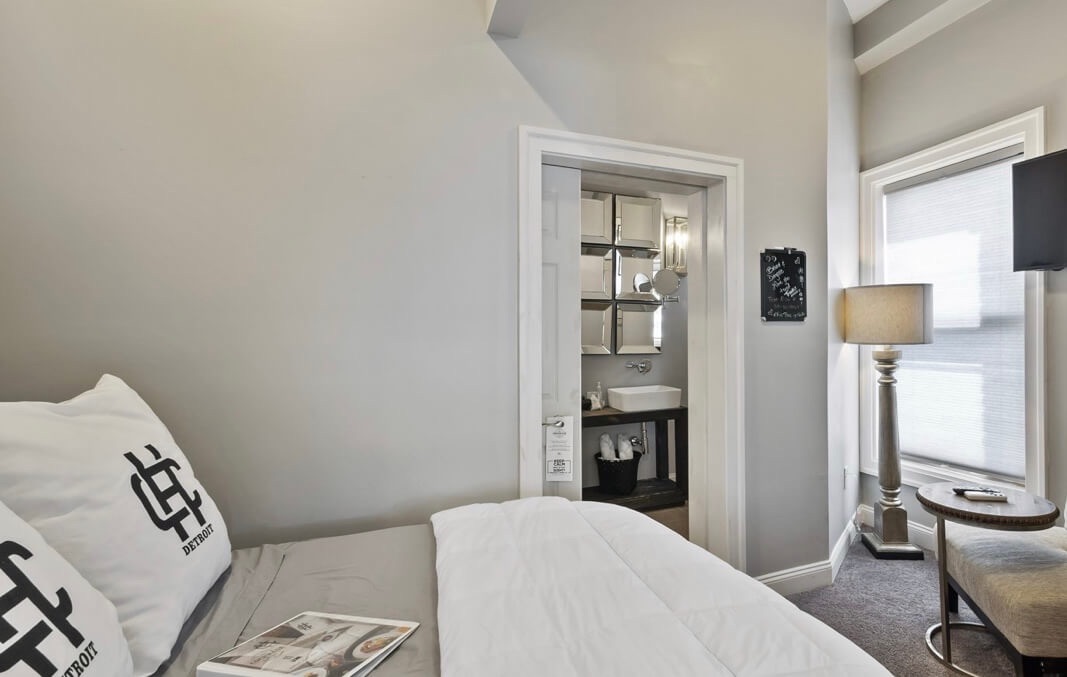 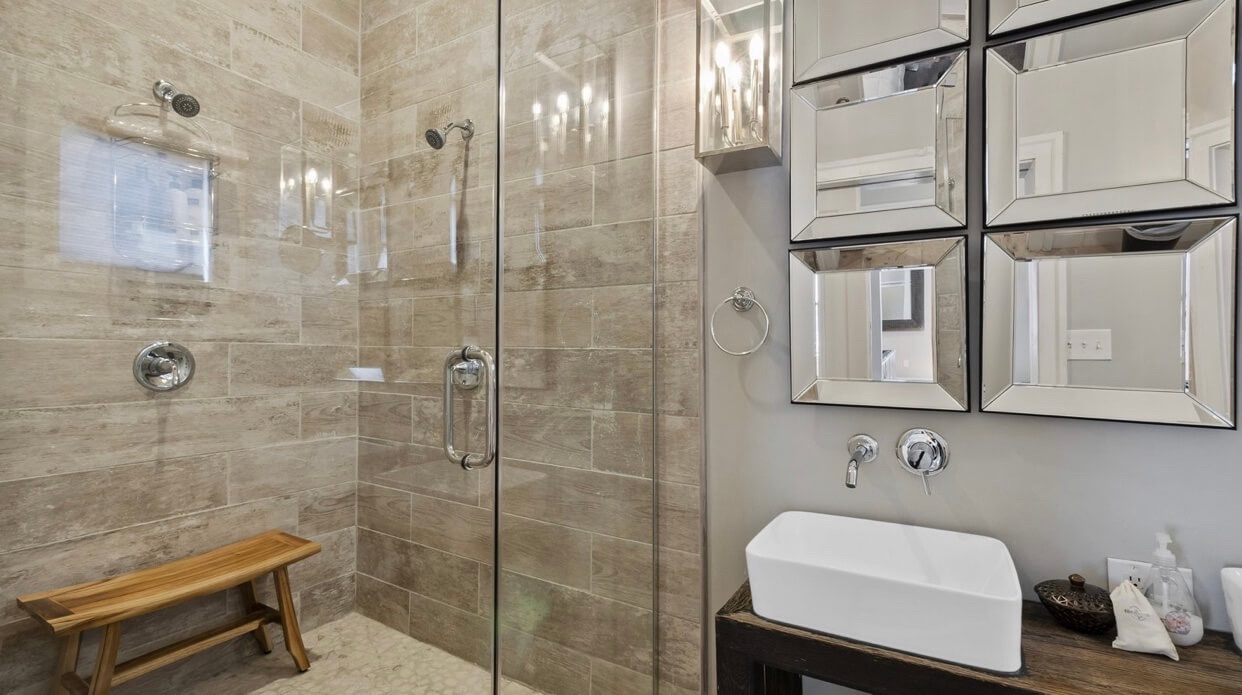 Park here at our inn in the heart of downtown Detroit and walk to many of downtown’s best-known attractions, including Comerica Park Stadium, Ford Field Stadium, Fox Theatre, Detroit Opera House, and Little Caesars Arena, home of the Pistons and Red Wings. After the event, you can be back here relaxing in your room before the parking lots and decks have cleared out.

Roderica and Francina James, sisters and innkeepers, love to host guests for romantic getaways, for friends getaways and retreats, and for small, intimate -- under 25 persons -- events and weddings. Business travelers are welcome, too.

We designed our spacious, open-concept common area on the first floor and our three second-floor guest rooms with luxury and comfort in mind.

Melodic Room, 250 s.f., has a queen-size bed plus twin-size trundle bed. In the attached bathroom, double sinks, a shower plus a soaking tub.

Jazz Fusion Room, 250 s.f., has a queen-size bed plus twin-size trundle bed and offers, from your very own balcony, views of Little Caesars Arena, the Fox Theatre, and downtown Detroit. In the attached bathroom, double sinks, two-person shower, and a soaking tub.

Rhythm Section Lounge Suite, 600 s.f., offers a double bed, its own lounge area with a 75-inch flat-screen TV, and views of Comerica Park stadium, Ford Field, the Fox Theatre, and downtown Detroit. The attached bathroom has double sinks and a two-person steam shower.

The Cochrane House is a place for adults. In the case of a whole-house rental, children ages 13 and over may be accommodated. Prices assume double occupancy.

Unlike in some lodging places that call themselves B&Bs, at the Cochrane House Luxury Historic Inn, the owner-innkeepers are on-site and ready to serve their guests.

Our structure has survived turbulent times in Detroit and reflects the true story of Detroit’s resilience. We are proud to have transformed this historic home into our highly acclaimed luxury boutique bed and breakfast.

Whether you’re about to pop the question or just need some relaxing couple’s time in a place where there’s no to-do list, The Cochrane House has lots of ways to enhance your getaway. As soon as you pick your dates and hit the “Book Now” button, you’ll see options you can add on, including a choice of romance packages, massages (Swedish, prenatal, deep-tissue, or our sleep-inducing massage), or a fruit and mimosa package to brighten your morning. With our s’mores package, you can even toast marshmallows over the fire pit on our patio.

We saw a need for small, all-inclusive weddings in an elegant yet home-like urban setting, and we have put a team of specialists in place to help you pull off your special day in a way that will be memorable but not stressful. As soon as you email an inquiry, the innkeepers will send you an attractive and informative pdf.

Bridal shower, baby shower, book launch, reception, business retreat, wine tasting, self-care event, a very special surprise party -- we do events well for small gatherings. For an indoor sit-down meal, we can accommodate up to 14 people. For an event where your guests will mill around, grazing and conversing, our first-floor space can accommodate up to 25 persons. We also have a on-site personal chef who can prepare the perfect meal. Ready to plan that special event? Please inquire.

The Lyman Cochrane Home is among the best examples of the Italianate style of residential architecture found today in Detroit. This home was erected in 1870 for Dr. John Terry, a Detroit eye doctor who decided to build his home in the Brush Park neighborhood, often-described in the 1900s as the "Little Paris of the Midwest." He lived in this mansion for only one year, before Lyman Cochrane purchased it.

In 1871, Lyman Cochrane not only occupied this beautiful home, but also was elected to represent Detroit in the Michigan State Senate. He served for two years and later was appointed judge of the Superior Court of Detroit in 1873. He served in that position until his death in 1879. A man who took pride in scholarship, he was said to have had one of the most extensive and valuable private libraries in Detroit.

Between the late 1890s and the early 1900s, as wealthier neighborhoods became established, original residents of this area started moving to areas such as Boston Edison and Indian Village. Brush Park became a highly sought after area for wealthier Jewish families, followed soon after by African American families.

During the 1930s, 1940s and 1950s, Brush Park was the epicenter of culture, art and music for African Americans. Paradise Valley served as the home to several "firsts" in Detroit and to this day the area holds rich history for the African American community. Between 1953 and 1967, urban renewal and the construction of highway projects uprooted this bustling area and caused the decline of this community.

Brush Park's revival began in the early 2000s and has since accelerated.

Tell the innkeepers what sort of restaurant experience you’re in the mood for or what kind of food you have a taste for, and chances are we’ll be able to direct you to a great place. Downtown Detroit is known to have more than 300 restaurant and bar options.

The Cochrane House is close to one of the largest urban theater districts. Think Broadway.

If sports is your idea of culture, we’re directly across the street from three sports stadiums, the only city in the county with all four major sports teams playing within a quarter of a mile of each other. We are in the middle of ALL the action! You can park here and walk.

Detroit also is passionate about arts and history culture. Hop on the Q-line Street Car and you are less than a mile to the Detroit Cultural Center, home to the Detroit Historical Museum, the Charles H. Wright Museum of African American History, the Detroit Institute of Arts (DIA) and so much more. The Cultural Center hosts art fairs, plays and concerts all year long.

Detroit is known for the beautiful Detroit River, where lake freighters and ocean-going ships pass by on their way to somewhere in the U.S., Canada, or the world. Take a stroll alongside the river on the Riverwalk or take a Diamond Jack Cruise to see Detroit from the water.

Or, how would you like to visit two countries in a day? The Cochrane House is only a five-minute drive to the international tunnel connecting Detroit with Windsor, Ontario, Canada.

We are less than a 20-minute drive to Belle Isle, a 982-acre island state park surrounded by the Detroit River. Visit the Belle Isle Aquarium, Belle Isle Conservatory or Belle Isle beach. Go kayaking or bike around the island.

Downtown Detroit is a bike-friendly city. We are less than a mile from the Dequindre Cut, a below-grade pathway that was converted from a former Grand Trunk Western Railroad line to a beautiful greenway decorated with artful and colorful graffiti. Ride this path directly to the Detroit River! Mogo Bikes and Lime Scooter rentals are available all over the city.

A favorite place for guests to bike to on Saturday mornings is Eastern Market, where farmers and artisans sell local food and products.

Avoid parking fees. Our B&B is within walking distance to many of the city's attractions, such as Comerica Park Stadium, Ford Field Stadium, Fox Theatre, Detroit Opera House, and the home of the Red Wings and Detroit Pistons, Little Caesars Arena! Fine dining, casinos, breweries, bars, and more are all a few steps away from our front door.  Hop onto the Woodward M1 Q-Line Rail and take a ride downtown to Hart Plaza, Campus Martius Park, or the Riverwalk. Alternatively, head north on the M1 Rail to Midtown's cultural center and enjoy Detroit’s gems, such as: the Detroit Institute of Arts, Charles H. Wright Museum of African American History, Max Fisher Music Center and The Detroit Historical Museum. All of Detroit’s downtown attractions are located within a two-mile radius of our historic inn.

Detroit doesn’t usually get as much snow as other Midwest urban areas, so go ahead and buy tickets for that Red Wings game, concert, or theater production -- and then book your comfortable accommodations at The Cochrane House. Not having to rush or having to navigate a freeway after the event will make your experience so much more fun and relaxing.

Bring your ice skates. With all the lighted trees, warming huts, and frequent outdoor concerts and other events, skating on the Rink at Campus Martius Park -- or even just seeing it -- is fun and beautiful. Rental skates are available; their reviews are mixed.

After a dinner out, snuggle together around the fire pit on the patio of The Cochrane House Luxury Inn. We even have a s’mores package you can add on to your stay at time of booking. 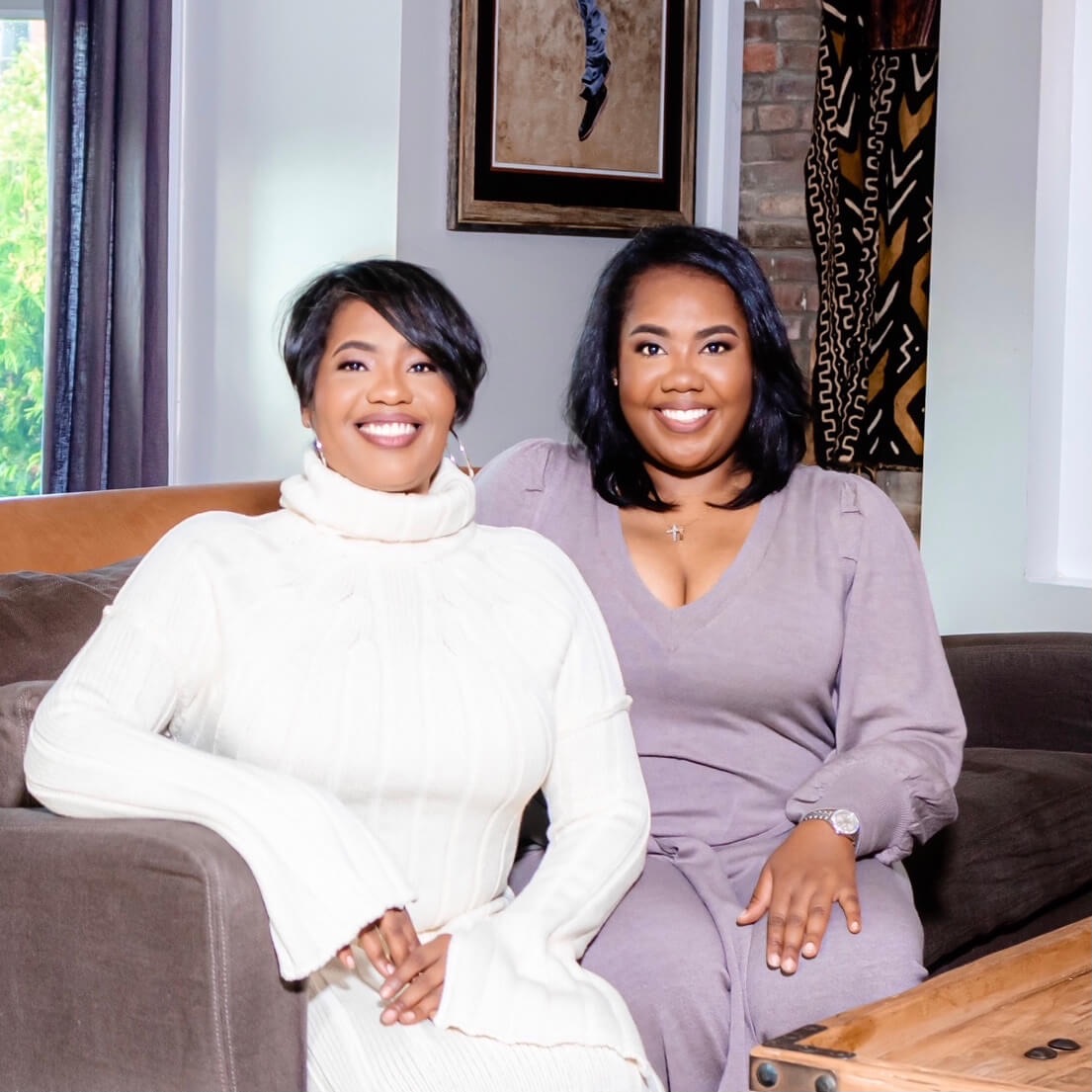