Affectionately referred to as “the Paris of the Midwest,” nicknamed “the Motor City,” and the birthplace of Motown Records, Detroit is a vibrant and happening place. At the Michigan Bed and Breakfast Association, we like to share the best places to visit when exploring Pure Michigan AND the best places to stay.  This blog focuses on the history and culture of Detroit, along with our 12 top favorite places to visit and where to stay when visiting Detroit.

It’s interesting to consider Detroit’s history by categorizing it into centuries.

Early Detroit was settled in 1701 by French colonists, who built a fort on the Detroit River.  Led by Antoine de la Mothe Cadillac with 100 soldiers, the wooden palisade was founded as a New France Fur Trading Post. Soon a little settlement grew up around the fort, but in 1760, the British captured Detroit during the Seven Year War. In 1796 the Americans took control of Detroit, and in 1802 Detroit was incorporated as a town. On the morning of June 11, 1805, the city of Detroit caught fire, and nearly everything was destroyed. The central city was quickly rebuilt and was recaptured by the British in 1812.

19th Century Detroit grew quickly with steamships sailing to and from Detroit Harbor, and in 1825, the Erie Canal opened, making easy transport of Detroit’s booming manufacturing of ships, wagons, buggies, and steam engines. In 1815 Detroit was incorporated as a city, the Eastern Market was founded in 1841, and the Belle Isle was laid out in the 1880s- the latter two being popular destinations today. Important history was made when Michigan was admitted to the union in 1837. The state constitution forbade slavery, and Detroit became an important stop on the underground railroad, which helped slaves to escape from slavery in the south. In the late 19th century, pharmaceuticals became a major industry in the city, and the manufacturing of stoves, furnaces, engines, and railroad cars was all made there.

20th Century Detroit brought on a new industry – making cars. Henry Ford made his first model T in 1908, and soon after, the auto industry in Detroit was booming. By 1910, Detroit was the 9th largest city in the U.S. In 1922, the Ford Motor Company introduced the 40-hour work week, which made Detroit a very appealing city to migrate to. The Great Depression had a devastating effect on Detroit. However, with the election of Franklin Roosevelt and his initiation of the New Deal, Detroit was able to bounce back. After World War II, Detroit was leading the country’s economy and accounted for “1/6 of the country’s employment with the auto industry booming and suburban expansion taking place. However, Detroit was becoming racially segregated during this time, and conditions were beginning to worsen with two major riots in 1943 and one in 1967.   Later in the century, industrial restructuring and trouble in the auto industry led to a dramatic decline in jobs and population. Since the 1990s, the city has gained increased revitalization. Many city areas are listed in the National Register of Historic Places and include National Historic Landmarks.

This beautiful city was once compared to Paris with its broad river, grand boulevards, and historically significant architecture. Then, in the 20th century, it became a ‘Motor City’, and thereafter its diversified population made it a magnet for a broad spectrum of cultural activity. The state’s first traveling theatrical companies performed in Detroit, and an opera house was erected before the American Civil War. The city is home to many cultural institutions, including The Detroit Institute of Arts, founded in 1885, which houses one of the country’s major collections of ancient and contemporary art from around the world. Everyone knows the Detroit Tigers, and this city embraces team sports. The cultural scene is also alive and thriving, with live music that can be found around the city streets. And the Motown scene is still represented by the Motown Historical Museum, which showcases the history of Motown and its influence on all musical genres. The classics can still be found at the Detroit Opera House and the Detroit Symphony Orchestra. It’s easy to see why Detroit is such a fabulous destination!

Top 12 Places to Visit in Detroit

The Charles H. Wright Museum of African American History honors and celebrates African American culture. There are dozens of permanent exhibitions to explore, covering topics from the Civil Rights Movement to a celebration of performance arts legends. The museum also hosts many special exhibitions and programs.

2. Take in a Show at the Fox Theatre

Opened in 1928 as the flagship movie palace for the Fox Theatre Chain, it was designated a National Historic Landmark in 1988 and listed on the National Register of Historic Places in 1985. The Fox has a capacity of 5,048 seats and plays host to many top shows and events. Check out the events at Fox Theatre.  Everything about this building is grand, including its size and inside features, including gilded balconies, ornate carvings, and incredible acoustics. The theatre hosts a range of Broadway musicals, stage performances, and live concerts each year.

3. Visit the Detroit Institute of Arts

Considered to house one of the best art collections in the United States, this respected museum showcases artworks from the earliest civilizations to modern art. Everything from mummies to African masks to Monets will be seen in its outstanding collection of over 65,000 works. Rembrandt, Van Gogh, Matisse, and Picasso are among the museum’s most popular works of European painting. The museum’s Islamic art includes everything from ancient pottery to contemporary bronze and stone sculpture. Don’t miss the Diego Rivera murals, which are a series of frescoes depicting industry at the Ford Motor Company.

For more information and to purchase tickets- http://www.dia.org/

4. Learn about the auto history at the Ford Piquette Avenue Plant

Learn about where the legendary Model T was conceived and experience walking on the original floorboards where Ford and his team revolutionized the automobile industry.  Ford used to work in the “experimental room,” which still has many of the tools and mementos of Ford’s childhood, including his mother’s rocking chair. 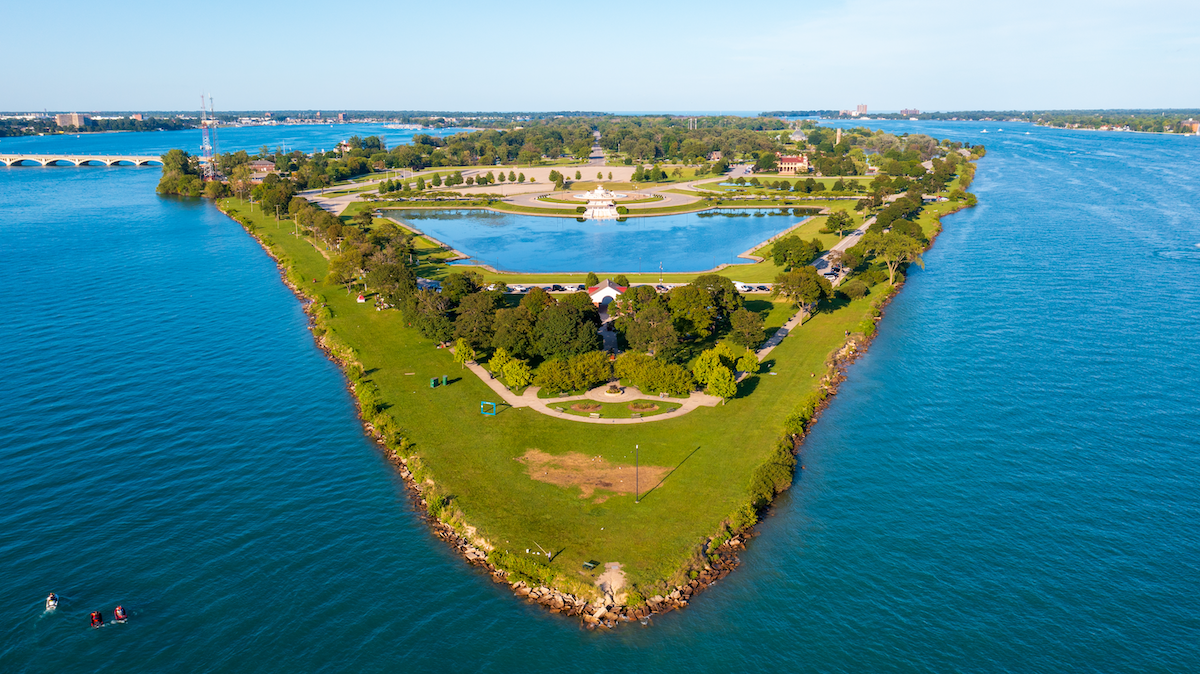 “Belle Isle Park is a 2.5-mile-long, 982-acre island park located in the international waters of the Detroit River. Inspired by renowned landscape architect Frederick Law Olmsted’s design in the 1880s, the park was created to provide an urban oasis in Detroit. Affectionately named the “Jewel of Detroit,” Belle Isle has significant natural, architectural, and cultural resources. Almost one-third of the island is a natural wooded area that is home to a wide variety of small animals and birds. The park features several historic public landmarks, including the Belle Isle Aquarium, Belle Isle Casino, Anna Scripps Whitcomb Conservatory, Dossin Great Lakes Museum, and the James Scott Memorial Fountain” from the Belle Isle site

Home of the Detroit Tigers, this is no ordinary ballpark. The combination theme park, ballpark, and baseball museum is a wonderful old-fashion way to experience a baseball game.

7. Take a stroll on the historic Riverfront

8. Feel the vibes in the Motown Museum

Detroit was a major contributor to the jazz and blues scene in the early 20th century, but Motown records were homegrown in Detroit. Local songwriter Berry Gordy started the hit-making machine, including -The Supremes, The Jackson Five, Stevie Wonder, and Marvin Gaye- all came out of Motown.  The Motown Museum, formerly known as Hitsville USA, was the original headquarters and recording studio of the record label and was open 22 hours a day, with famous and upcoming artists cycling in and out regularly.

9. Be “Educated” at the Detroit Library

When the Detroit Public Library first opened its doors in 1865, its collection consisted of 5,000 books, all contained in a room within the old Capital High School building. The library moved to its current location and is the pride of Detroit.

The largest library system in Michigan, Main Library, and its 21 branches make it one of the most accessible public institutions in metropolitan Detroit.

Our favorite includes the Greenfield Village-

Located near the Henry Ford Museum on Oakwood Boulevard, the museum houses almost 100 historic buildings from the 18th and 19th centuries in an open-air museum environment. The buildings within the museum are from various places throughout the United States and have been rebuilt in Greenfield. The most notable buildings include the building in which Henry Ford was born and the bicycle factory of the pioneering Wright brothers

11. Go Antiquing at the Antique Mall

Detroit is a paradise for antique lovers. Whether you are a serious dealer or a part-time bargain hunter, check out The Detroit Antique Mall and the Eastern Market.

Founded in 1903 by Mary CP Stratton and Horace Caulkins, Pewabic Pottery ran successfully for almost 60 years until the death of Stratton in 1961. Located on Detroit’s East Jefferson Avenue, this Tudor-style building was constructed in 1907 and is one of the oldest continuously operating potteries in the nation.

There are many culturally significant buildings and landmarks in the city of Detroit, where you will find Pewabic Pottery, including our very own member, the Frederick K. Stearns House, where you will see several fireplaces constructed with these gorgeous tiles.

All our member inns have unique offerings.  Detroit brings two upscale historical properties. Both have been thoughtfully and historically restored,  pampering you with upscale amenities and wonderful hospitality.

The Frederick K Stearns House is located in the trendy West Village Neighborhood and close to several of Detroit’s famed attractions. Guests enjoy a morning stroll in the historic Indian Village, a riverfront walk, or dining in nearby restaurants. The 16,000-plus-square-foot mansion was built in 1902 for Frederick K. Stearns, who was a respected pharmaceutical businessman in Detroit. William Stratton designed the elaborate home with a rich architectural palette of fine medieval design and structure.  Grand yet intimate with luxurious rooms and baths and a fun SpeakEasy pub, this remarkable property is a great place to call home during your Detroit getaway. An in-house chef and a caring innkeeper will have you planning your next visit during your stay.

For more information and to book your stay- https://www.frederickstearnshouse.com/

For more information and to book your stay-https://www.thecochranehouse.com/

Our monthly articles are, like this one, packed with interesting travel ideas and news of outstanding Michigan bed and breakfasts. To make sure you don’t miss one, subscribe now. Our quick-read newsletter will come to your inbox. No spam. No sharing your email address with anyone else. Good stuff.