The owners of Hanson House already owned a bed and breakfast in Auburn Hills when they fell in love with Grayling. (As you will too.) After a fraternity brother of Paul Crandall introduced the couple to the peaceful joys of life on the Manistee River, Paul and Heather soon bought a cabin of their own.

But the occasional Up-North getaway wasn’t enough. Paul and Heather began to envision a less-hectic life for themselves. More kayaking, less commuting. So, when it came on the market, the one-time home of one of Grayling’s most famous citizens became theirs. 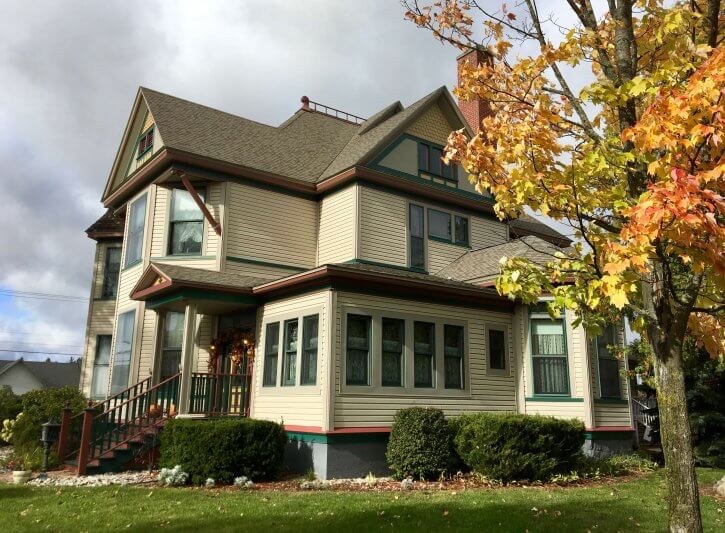 Life didn’t immediately become less hectic for the Crandalls. In fact, it became even more frenzied during the four years when Heather welcomed B&B guests at Hanson House while Paul did the same at Cobblestone Manor. Last summer they closed on the sale of the Auburn Hills B&B after operating it for 20 years. (Under a new name, it has become housing for honors students at Oakland University.)

At Hanson House, you can sleep in the bedroom Rasmus Hanson built for himself in 1890 or choose from three other guest rooms in the pristine, renovated home. A fifth upstairs room can be used if a party requires a second bedroom.

Rasmus Hanson, born in Denmark, not only was a leading Northern Michigan lumber baron but also owned the Michigan Sugar Company and Bay City Sugar Company, among other businesses. He brought electrification to the city in 1902 to increase the standard of living as well as to power his mills. He donated thousands of forested acres in Crawford County for use as a forest game preserve and for what became Camp Grayling, the country’s largest National Guard camp.

Hanson, along with Henry Ford I and Thomas Edison, founded the Grayling Fish Hatchery in a vain attempt to bring back the Arctic Grayling, whose habitat had been decimated by the practice of using river beds to move logs to the lakes and by the introduction of non-native fish species.

Birders flock to the area for a glimpse of the rare and elusive Kirtland’s warbler or to photograph one of the area’s many bald eagles.

In the winter, people go to Grayling for cross-country skiing and snowmobiling. You can hop on a snowmobile trail only a block from Hanson House. Return at dusk and warm up by the fire. A hearty breakfast will start your morning.

Regardless of what time of year you stay, Paul says, “No other lodging in town offers the experience guests can find here, including an atmosphere of history, clean rooms, luxury amenities, and scrumptious breakfasts. And our in-town location allows guests to walk to our developing central business district.”

Visit Grayling and Hanson House soon to discover what drew Paul and Heather Crandall to the area. The B&B is open year round.

« Ginkgo Tree Inn: Stay in town on a river
B&Bs where veggies at breakfast star »